This year has been a challenging one. But there is a feeling, amongst some that when we get to 2021, everything will get better; Covid-19 vaccines will be distributed, the pandemic will finally be over, and we can return to normal. In actuality, with the federal eviction moratorium set to expire at the end of the year, cold weather, and Covid spikes crippling small businesses, the darkest days of the pandemic are right around the corner. A case can be made for a small business bailout, but what we really need is an extension of the eviction moratorium. We need an eviction moratorium 2.0 that forgives back rent tenants owe their landlords.

“The Southeast area of Winston-Salem is an area that
has experienced change in recent years due to the
increased numbers of immigrants, mostly of Hispanic
origin, settling in and opening new businesses, enhancing
further diversity in its population.” -Southeast Area Plan, 2002

Gaama Foods closed recently. The Latinx-focused grocery store at the corner of Waughtown and Reynolds Park Road, in the Southeast Plaza shopping center, will be missed. When it first opened a few years ago as Compare Foods, it was a modest grocery store with an impressive produce department. A couple of years ago, it became Gaama Foods.

The Lion Isn’t Afraid To Operate In East Winston

The amount of money that is going to be invested in and around Cleveland Avenue is astounding. In a sense, it’s like Cleveland Avenue, and adjacent neighborhoods won the lottery. On the other hand, the infusion of tens of millions of public and private dollars will lead to the displacement of longtime residents if the community is not involved in its “transformation.” I worry about residents who have suffered for years in poorly maintained public housing units won’t be allowed to live in the new homes on Cleveland Avenue. On the other side of 25th Street, Piedmont Circle is in the shadows.

As Thanksgiving approaches, the nation’s news cycle focuses on hunger and homelessness. It happens every year. Newspapers and broadcast media love feel-good stories about neighbors helping neighbors. But they don’t spend much time focusing on why so many people don’t have access to basic necessities in the wealthiest nation on the planet. Homelessness (and hunger) should not be chronic conditions in our community.

At the November 16 meeting of the Winston-Salem City Council, our centrist-Democrat-dominated governing body voted 7-1 to use $1 million from the City’s scarce housing assistance funds to subsidize development at Whitaker Park. Councilmember Dan Besse was the only member of the council who objected. In today’s blog Throwback Thursday blog (the first of what I hope to be regular installments), I’m going to briefly examine the City’s use of $2 million in Community Development Block Grant (CDBG) loans to assist Brookwood Business Park while they ignored the needs of nearby Piedmont Circle.* You may ask why I’m lumping a business park with a public housing community? Brookwood and Piedmont Circle are adjacent to each other. And it’s striking to see a new business park from the City and the County’s modern Sheriff’s Office across the street from Piedmont, while Piedmont Circle appears to be frozen in time.

Liberty CDC And The Limits Of Working Within The System

The Winston-Salem Journal recently reported that Jim Shaw, the man “who led efforts to develop the Liberty Street Corridor, died Monday of brain cancer.” I will leave it to others to judge Jim Shaw, The Chronicle’s 2006 Man of the Year. I don’t wish to speak ill of the dead. But the CDC that Shaw led for the better part of 20 years deserves scrutiny. The Liberty CDC floundered in its efforts to redevelop the Liberty Street Corridor while Downtown Winston-Salem was transformed at great costs to local taxpayers.

“Bowen Park now has a historical marker. The community was home for many Blacks seeking their part of the American dream in the 40s, 50s, and 60s-a place viewed fondly for the foundation it laid, the men and women it made, and the home it continues to be today.” -Bowen Park: A Dream Realized

Recently, the City of Winston-Salem put up a historical marker at Bowen Boulevard and Douglas Hill Drive, honoring the Bowen Park Neighborhood. Unlike Reynoldstown and most of East Winston, which were originally built for white homeowners, Bowen Park was built for African Americans. Bowen Park was segregated when it was built in the 1940s and 1950s, and it’s still segregated today.

Last Monday’s Public Safety Committee meeting was brief. The only item of note was the WSPD’s Gang Unit presentation. The most destructive gang in Winston’s history is R.J. Reynold’s participation in the Big Tobacco Cartel. That cartel has sent millions of its consumers to an early grave in order to profit from the most deadly consumer product ever invented. It’s also worth noting that shortly before Wachovia’s collapse in 2008, it was caught laundering money for an infamous Mexican drug cartel.

I wonder if Donny Lambeth can actually get the state to pay for the Stevens Center's upgrades. I love the terms "learning laboratory," "economic driver" + "cultural destination" being used to describe a theater. #InnovativeRational #NCPol #WSNC https://journalnow.com/news/local/bill-to-renovate-stevens-center-to-the-tune-of-42-million-resurfaces-in-nc-house/article_d18d47f8-7602-11eb-a911-ab1b9afbfe06.html

Less Carol A. Moore is more. Good luck to Guilford College as it moves forward. https://greensboro.com/news/local/education/guilford-college-names-its-second-new-president-in-less-than-a-year/article_8bc223e2-7616-11eb-82d7-2bf0194008a0.html

You're cordially invited to attend a free virtual lecture by acclaimed author Richard Rothstein. Rothstein will present research drawn from his book The Color of Law (2017).
➡️http://Legalaidnc.org/rothstein to register!

"Pigs are going to hold other pigs accountable when pigs fly." 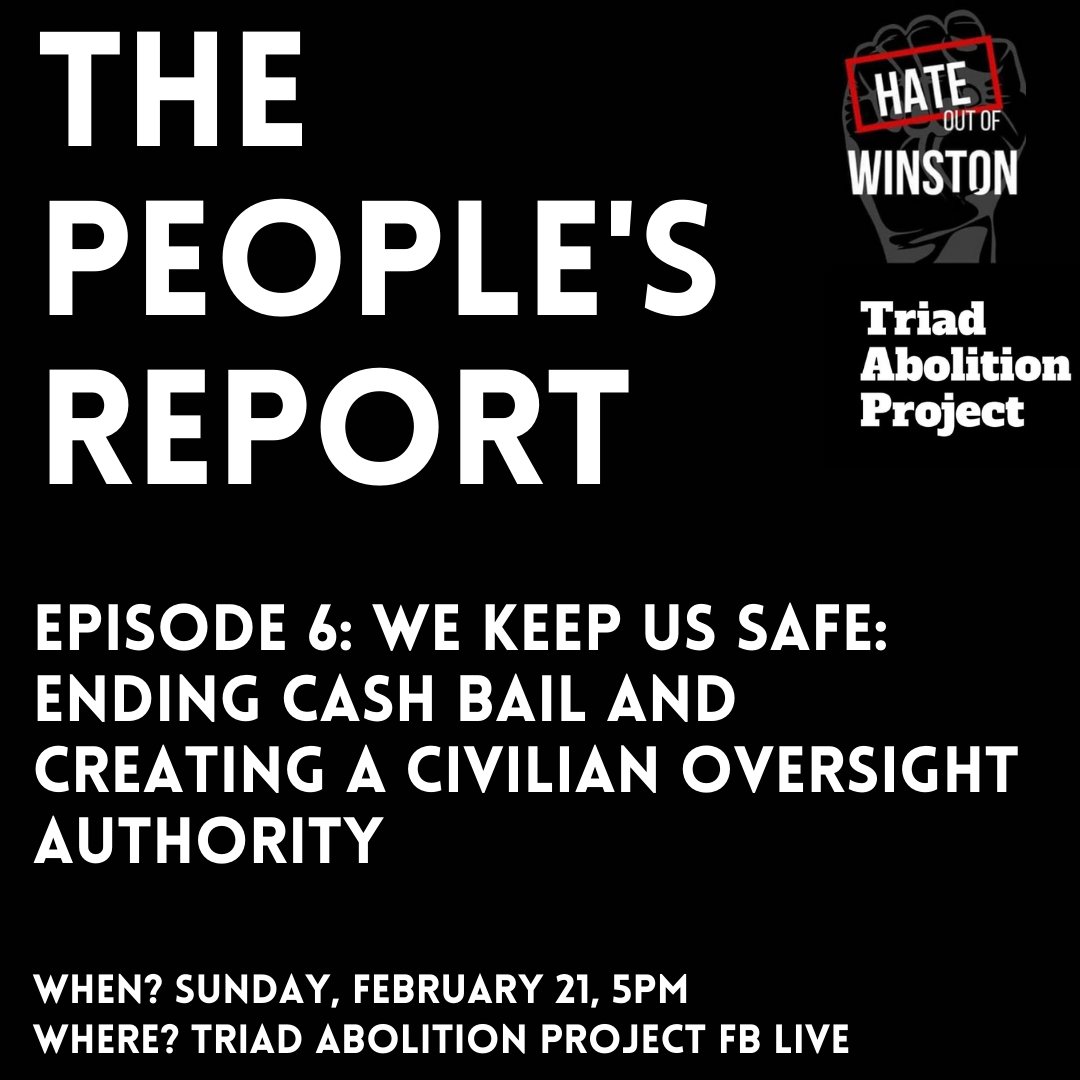 Join us tomorrow (2/21) at 5 PM on TAP's Facebook Live for episode 6 of The People's Report! Our panelists will discuss why establishing an independent civilian oversight authority and ending cash bail will create a safer community.