It’s Thanksgiving, a uniquely American holiday. For all the reasons to hate Thanksgiving, I still love it. I know that our nation’s genocide of Native Americans is nothing to celebrate.

But Thanksgiving with all its baggage is a time to gather with family and friends. It’s a time to be thankful for the things that we have, even as we actively covet Christmas gifts that we don’t need.

The Boston-Thurmond Innovation Network is proposing to buy the Plaza Apartments from the City, purchase adjacent land from Crossmore children’s home, then bulldoze the Plaza Apartments, and build a new ambitious development on the combined property.

The Boston Thurmond Innovation Network, as the name suggests is being championed by largely the same network of academic, non-profit and real estate leaders that are responsible for the Wake Forest Innovation Quarter (Dr. Nathan Hatch, WFU, Don Flow, Flow Auto-and others).

They are a who’s who of Winston’s business class. They have Mayor Joines’ ear and the project has already received the blessing of the City Council. The City Council’s Community Development/Housing/General Government Committee recently entered into a letter of intent agreement with the Boston-Thurmond Innovation Network to sell the Plaza Apartments to the BTIN. The matter still needs to go before the full city council.

During her two terms in office (2002-2010), Mayor Franklin used HUD’s HOPE VI program to justify completely eliminating public housing in Atlanta. Now, as CEO of Purpose Driven Communities, she’s exporting the Atlanta model to the Winston-Salem and the rest of the country.

Residents of the Plaza Apartments are right to oppose the new development. WFU’s purpose is to drive many of them from their homes on the corner of Northwest Blvd. and Thurmond Street. 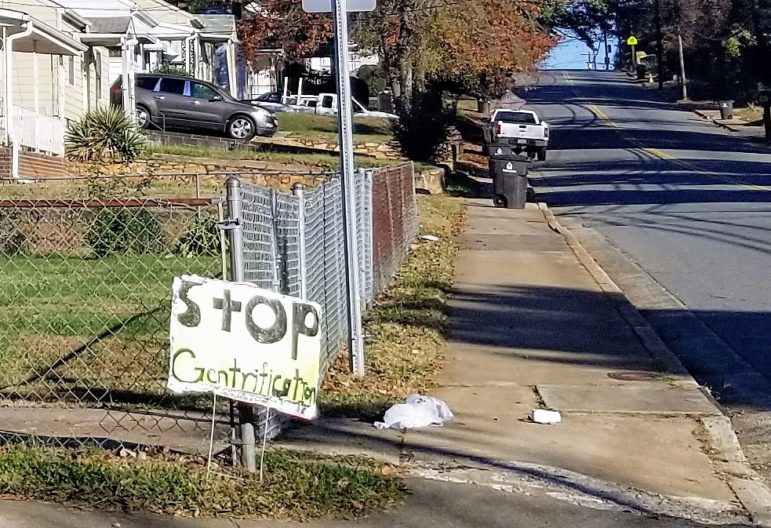 This is not a “residence driven development.” Winston’s business and non-profit elite are pulling all the strings.

For all the high-minded intentions that the Boston-Thurmond Innovation Network have stated publicly, they haven’t made any guarantees to the current residents of the Plaza Apartments. Absent guarantees in writing, what good are words?

Besides, Wake Forest has ignored low-income communities bordering its campus for decades. Now they care about Boston Thurmond? Why should local residents trust them.

The Purpose Driven Communities model, like HOPE VI before it, largely ignores systemic racism and capitalism’s subjugation of the poor. PDC puts too much emphasis on the problems associated with concentrations of poverty.

They stress providing education and other services to poor residents, in the hope that they will adopt a middle-class mindset and somehow will their way out of poverty. In reality, they are providing window-dressing for developers seeking profits.

The poor aren’t the problem. Often communities of color like Boston-Thurmond have many residents with deep roots to their communities. Folks with churches and social networks that provide help to each other in times of need. When they are pushed out of their neighborhoods due to gentrification, these networks of mutual aid get disrupted, leaving displaced residents no one to turn to.

Wake Forest’s Boston-Thurmond project has some space for poor neighbors. But it would primarily be a mixed-income development.

We’ve seen in the past that “mixed-income” projects mean that most of the residents of the Plaza Apartments will get displaced from their neighborhood, most likely pushed to the other side of Highway 52.

That’s what happened to Kimberly Park in the late 1990s and Happy Hill in the early 2000s. HOPE VI was used to push low-income Black people from their neighborhoods. Many longtime residents were displaced and forgotten about. The Black character of Happy Hill, Winston’s oldest African-American neighborhood, tragically has largely been removed.

That’s the future of Boston-Thurmond if we don’t stand up to Mayor Joines and the city council and loudly demand that the Boston-Thurmond Innovation Network’s plans must not be approved without concrete guarantees for the neighborhood’s current residents.

Every current resident of the Plaza Apartments must be reserved a home in the new development, at the same level of rent. There needs to be concrete provisions to preserve truly affordable housing in Wake’s new Boston-Thurmond project. Not token “affordable” housing that is beyond the budget of most poor and low-income people.

Demanding that truly affordable housing in Boston Thurmond be preserved for decades to come might seem audacious to many. But in fighting for Boston-Thurmond, we must remember all the once flourishing Black neighborhoods that the city has bulldozed over the years: Happy Hill, Columbian Heights, Depot Street, Belews Street and many others.

With the force of history behind us, we must demand that not one more Black neighborhood will ever be sacrificed and gentrified in Winston-Salem!