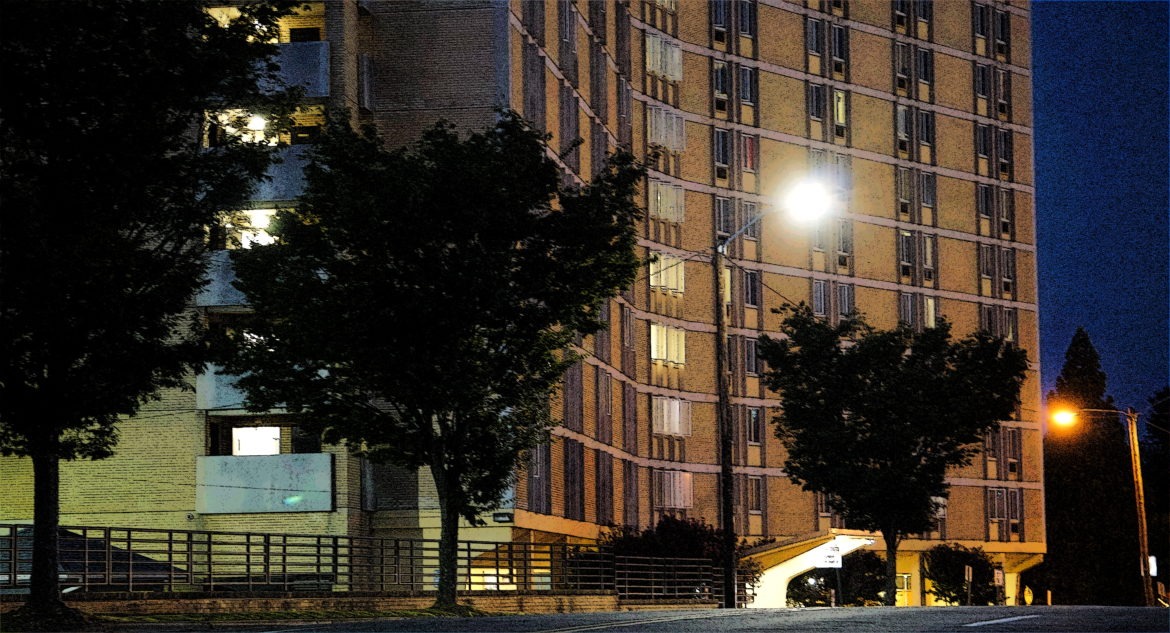 It was one year ago to the day that the Housing Authority of Winston-Salem (HAWS) announced that it was putting Crystal Towers up for sale. The 11-story high-rise located at 625 West Sixth Street in downtown Winston-Salem, opened in 1970 and is home to approximately 200 residents.* According to Heather Fearnbach, the woman who wrote the book on Winston’s architectural heritage, Crystal Towers was the city’s first high-rise dwelling erected since the late 1920s. Crystal Towers, (along with its sister high-rise, Sunrise Towers) was designed to serve as housing for the elderly. Today, one hundred percent of Crystal Towers’ residents are elderly and or people with disabilities. These are the last folks that the Housing Authority should be evicting. (HAWS prefers the term ‘relocating.’)

W-S Housing Authority CEO, Larry Woods maintains that HAWS has no choice but to sell Crystal Towers. At the September 2018 meeting of the Community Development, Housing & General Government Committee Woods told Council Members that Crystal Towers was “outdated and antiquated.” He added that it was bleeding money due to major plumbing and electrical issues, as well as elevators that require costly custom parts. And as maintenance costs have increased, according to Woods, the subsidies from HUD per unit have decreased (from $274 per monthly rent in 2014 to $198 in 2017). To make matters worse, HUD has mandated that each property be self-sustaining.

Information on Winston-Salem Housing Authority’s Intent to Receive Purchase Offers on the Crystal Towers Apartment Community (Start at the 1:45 mark)

The Housing Authority has known for years that Crystal Towers needed massive repairs.  Why didn’t Larry Woods ever go to the City Council hat in hand? In a recent Facebook post, JoAnne Allen addresses the question that the city’s newspaper of record has refused to ask.

In a September 13, 2018 article Todd Luck (County Government) quoted Mr. Larry Woods, “…that maintaining the building would require an escalating permanent subsidy on a federal property, which he felt would be “irresponsible ” for him to ask for from the City.” In my recorded speakerphone meeting with Mr. Woods and Mr. Kevin Cheshire (HAWS Attorney and VP) two weeks ago, I asked Mr. Woods why he never requested any funds from the city for Crystal Towers? Mr. Woods answered that he was told by Former Council person Wanda Merschel in 2011 not to request any city funds and then by former Community Development Director Mr. Richie Brooks (after 2012) not to ask the city as well! In other words Mr. Woods never asked the city for any assistance! So Mr. Woods, were you lying to me or to the reporter?

Last Septemeber, council members asked Woods if there was a way they could keep the residents of Crystal Towers in Crystal Towers. James Taylor lamented losing affordable housing in the heart of Downtown Winston. Dan Besse said that closing CT would price people out of the central city. Jeff MacIntosh called Crystal Towers a “textbook case of gentrification.” Then Councilmember Derwin Montgomery lamented that there are “no plans to reproduce 203 housing units in the community” and that “$7 million won’t get 203 housing units today.” Montgomery went on to point out that selling Crystal Towers would have “a larger ripple in the community,” reducing the already low amount of actually affordable housing in Winston.

Mayor and W-S Alliance president Allen Joines is on the record opposing the sale of Crystal Towers. But the Mayor and members of the City Council haven’t put their money where their mouth is. While they’ve funded stadiums and parking decks of questionable benefit to the people of Winston-Salem, they haven’t attempted to bailout Crystal Towers. This past spring, the City came up with $1.75 million to purchase a bankruptcy court building. But they haven’t cut any checks to save Crystal.

The process of selling Crystal Towers has been a slow-motion nightmare. The City has had plenty of time to act. But they have chosen not to. They have abandoned Crystal Towers’ residents.

While the Mayor and the City Council fiddled an offer was submitted to HAWS. In June, the Journal reported that The Arden Group LLC (car salesmen turned real estate developers) submitted a bid to purchase Crystal Towers. The Housing Authority is currently waiting for approval from HUD. Before HAWS can hand over Crystal to The Arden Group, they must rehouse the approximately 200 residents presently at 625 West Sixth Street.

In the past year, HAWS’ CEO Larry Woods has stated numerous times that the residents of Crystal Towers will not be displaced. In September 2018 Woods told the City Council that “it is my understanding…that the tenants of that building cannot be displaced. We are obligated by law to make sure that every resident has options to move to a new location.”

Woods went on to explain that HUD would issue Tenant Protection Vouchers (TPV) to current CT residents. These would be in addition to HAW’s current stock of Section 8 vouchers. TPVs, according to Woods, would give residents an upgrade from conditions at Crystal Towers. According to Woods, costs will not go up for displaced tenants. If a tenant pays $50 now, they will pay $50 in the future; allowances will also be made for utilities.

Mr. Woods’ assurances sound too good to be true. Virginia Foxx’s favorite public housing director knows perfectly well that anyone can get lost in the system. Ask tenants and even property managers that have dealt with HAWS; they’re notoriously hard to deal with. They are not the good guys. In fact, the Housing Authority is a major player in Winston-Salem’s eviction crisis.

Should the sale of Crystal Towers go forward, the question of where will they go is anything but settled. The fear is that many of CT’s residents will end up at the Cleveland Avenue Homes or Piedmont Circle; far from downtown, in conditions that are no better than where they left.

Given the challenge of rehousing over 200 residents during an affordable housing crisis, there is a potential for Crystal Towers residents winding up at the Rescue Mission or on the streets to fend for themselves. The sale of Crystal Towers is an existential threat for Crystal’s current residents.

The sale of Crystal Towers is a stain on Mayor Joines‘ legacy. Jesse Allen Joines (hired gun of Winston’s capitalist class) has lifted heaven and earth to support Downtown Winston, but done little to provide affordable housing for the rest of us. The sale of Crystal is a call to arms for housing activists in Winston and anyone else who is tired of profits being placed ahead of people. We cannot sit idly by as the agents of gentrification push over 200 vulnerable residents from Downtown Winston.