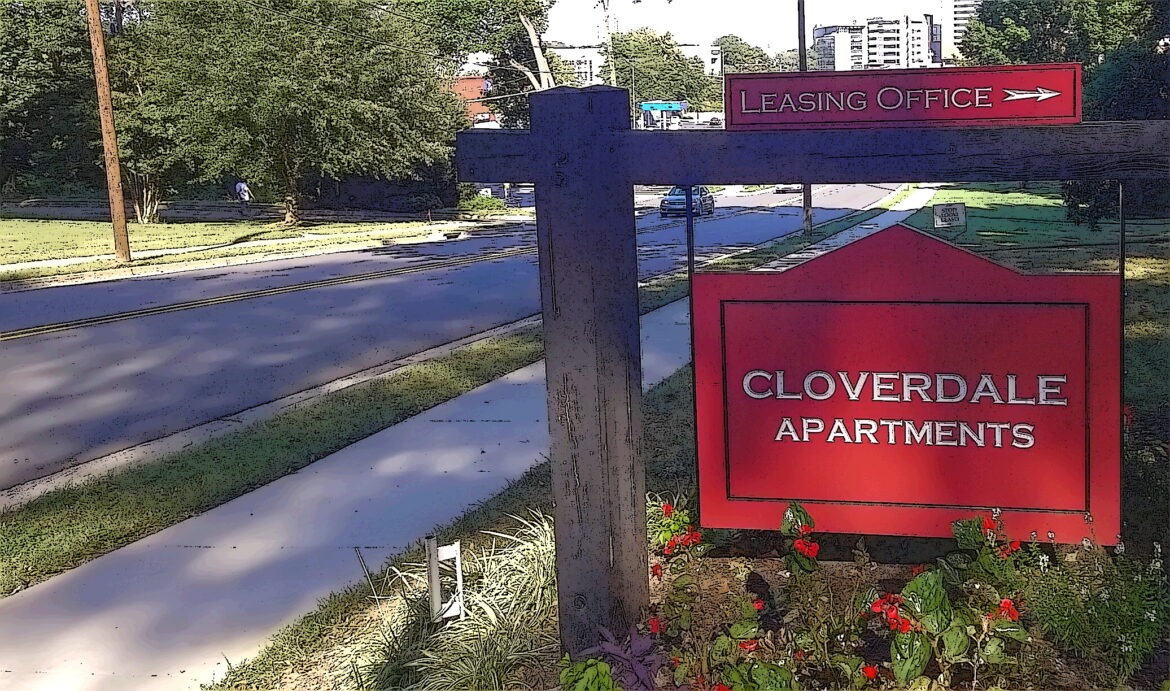 Earlier this month, the remaining tenants at the Cloverdale Apartments were told to be out of their homes by early March. According to the Journal, approximately 45 residents remain at the decades-old apartment campus, which has become a fixture in Ardmore, with its simple brick buildings, Luthern red doors, surrounded by huge, old trees.

The Cloverdale Apartments (and Ardmore Terrace Apartments) are in one of the best locations in the city, close to restaurants and retail-just a short walk from Baptist Medical Center. Residents that I spoke to on Thursday were uncertain of where they would go. They told me that application fees were costing them dearly, negating the relocation allowance that the owners of the apartments are giving them.

One couple told me that they came to the Cloverdale Apartments in 2012 after they were forced to relocate when the former Westside Apartments on First Street were demolished. “The Edge” apartments that replaced the Westside Apartments were mainly constructed to house Bowman Gray medical students. Unbeknownst to The Edge, Wake Forest decided to move its medical school to the Innovation Quarter. The result was that working-class residents were displaced for half-empty luxury apartments.

Demolishing the Cloverdale Apartments, destroying working-class housing is a loss that our city cannot afford. But it’s better than the developer’s original 2015 plan to tear down both the Cloverdale Apartments and its sister property Ardmore Terrace and construct a tacky, high-end, “work-play” development. That would have completely changed the character of the neighborhood, making it look like uptown Charlotte.

The soon to be demolished Cloverdale Apartments and Ardmore Terrace (which is safe for now) have been gold mines for the family that owned them. Constructed in the late 1940s and early 1950s-their exceptional location meant low vacancy rates and high returns. They were Wilson-Covington’s first project. They launched Wilson-Covington, which went on to become a highly profitable construction and property management company.

Both the Cloverdale and the Ardmore Terrace Apartments are owned by Covington-Wilson, LLC, according to the Triad Business Journal.

Covington-Wison doesn’t see the community value of the rental homes they have owned for decades. They have refused to include any affordable housing in their redevelopment plans-despite that being the pillar upon which their company was built. They’ve even ignored Councilmember Dan Besse’s willingness to help them secure state and local dollars in exchange for the preservation of some affordable housing units.

This extreme callousness is unacceptable. Renters at Cloverdale who have paid their rent on time every month for years are now in a precarious position. Covington-Wilson (or whatever shell company they want to call themselves) has an obligation to help their remaining tenants find safe, affordable housing.

The loss of the Cloverdale Apartments is a clear example of how the housing market has changed for the worse in recent years. Property owners are no longer content with stable investment returns. They want the exorbitant rents that luxury apartments with ridiculous amenities will give them.

To combat greedy property owners, we need Councilmembers like Seattle’s Kshama Sawant, who is building a workers/tenant rights movement to check the power of the rich in Seattle. Behind the scene negotiations-the kind that Dan Besse engaged in are not enough. Winston-Salem also needs a tenants union to make sure that when Ardmore Terrace is redeveloped in the coming years it remains affordable, workforce housing.

Let the owners know that we want to see Ardmore preserved! …Not turned into a parking lot of unaffordable housing! pic.twitter.com/dOWwIPBhXl


*When I posted this article, I mistakenly stated that Wilson-Covington owned the Cloverdale and Ardmore Terrace Apartments. I was wrong. Covington-Wilson owns those apartments.