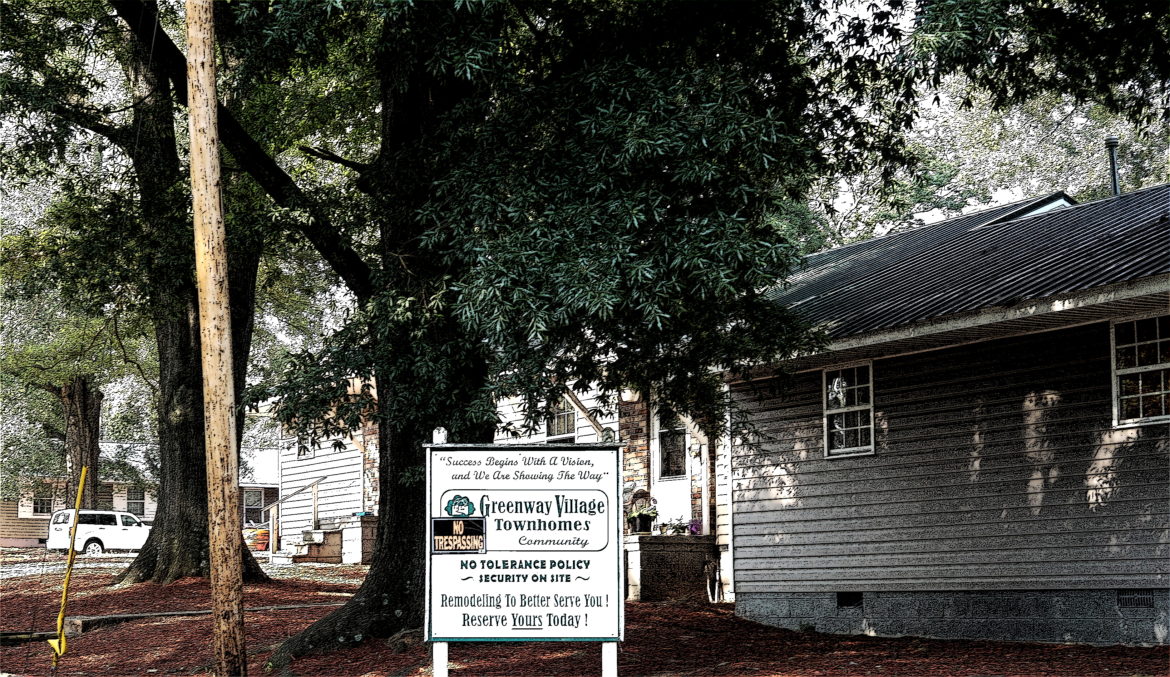 “Mass evictions are taking place at the Greenway Village Apartments.” That’s what a friend of mine with Housing Justice Now told me on Saturday.* I stopped by Greenway Village Monday afternoon to see if I could verify what I had been told and to encourage anyone facing eviction to fight back.

The Greenway Village Apartments are located just behind the former St. Phillips Moravian Church. The one-story frame apartments were built in the late 1940s to address a severe housing shortage after World War II. Greenway Village reminds me of the so-called ‘Lakeside Villas’ on New Walkertown Road-but with massive trees that give Greenway Village almost a camp-like feel.

Faded signs, lawns devoid of grass, vacant and boarded-up properties tell the story of an apartment complex in serious need of rehabilitation. The sprawling 148 unit apartment complex located in the southeast corner of the North Ward has seen better days. Greenway Village is a short drive from Wake Forest’s BB&T Field and the Lawrance Joel Veterans Memorial Coliseum, but Greenway Village is a world away from Wake. It’s poor and mostly Black, where Wake is primarily affluent and white. 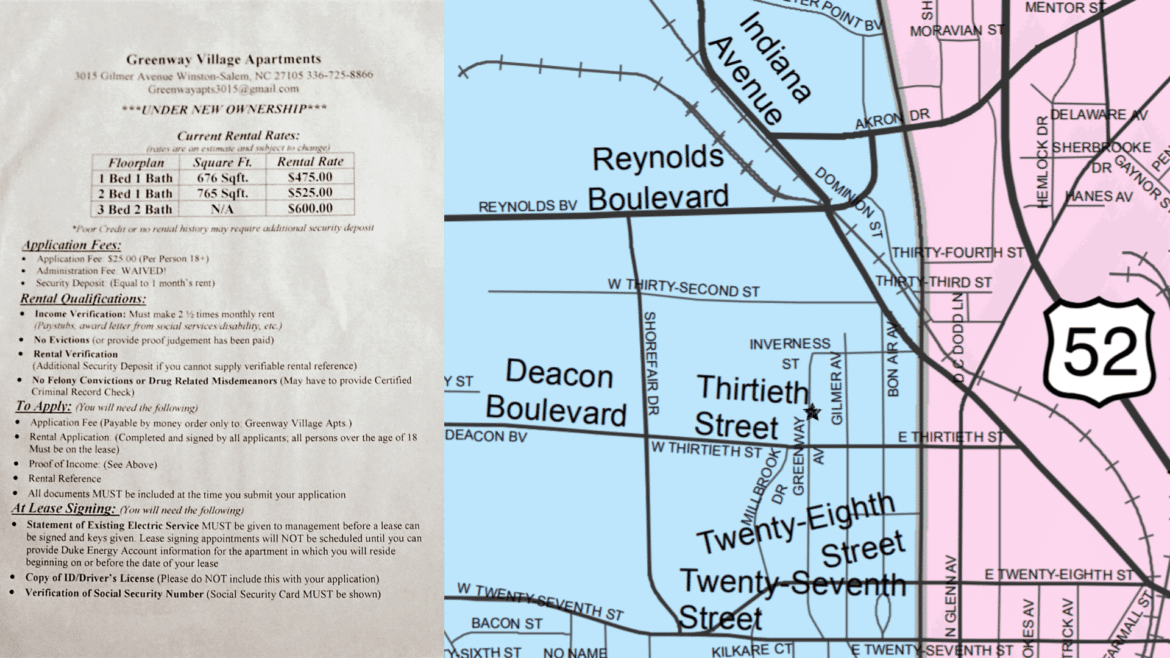 Greenway Village was purchased by an investor based in California for $2.8 million in March. Investors from around the state and the country have been feverishly buying up apartment complexes in Forsyth County of late.

Sadly, the new owners don’t appear to have any California Love. But they know how to fill out eviction papers. They’re evicting tenants with felony records as fast as the law allows. According to the tenants I spoke to, management has recently evicted or is in the process of evicting 29 people; based on prior felony convictions-not current behavior.

And that felony conviction could have occurred five years ago or twenty-five years ago. I spoke to one tenant whose felony dates back to the Reagan Administration. These folks have done their time. They shouldn’t be put out on the street because of their records. It’s worth noting that one of the Mayor’s Poverty Thought Force recommendations was banning the box.

Many of the tenants at Greenway Village have put up with substandard maintenance service for years. Last Septemeber the Journal examined the conditions at Greenway Village and found them lacking. One tenant told me that her apartment “was falling down when I moved in.”

According to Eviction Lab, there were 3,173 evictions in Winston-Salem in 2016 (the most recent year available). That amounts to 8.69 households evicted every day. 7.08 in 100 renter homes are evicted each year. Winston is 16th worst in the nation when it comes to evictions. There’s something seriously wrong with a system that efficiently evicts tenants but doesn’t ensure that landlords are maintaining their properties.

*I’m an active member of Housing Justice Now and no friend of slumlords. 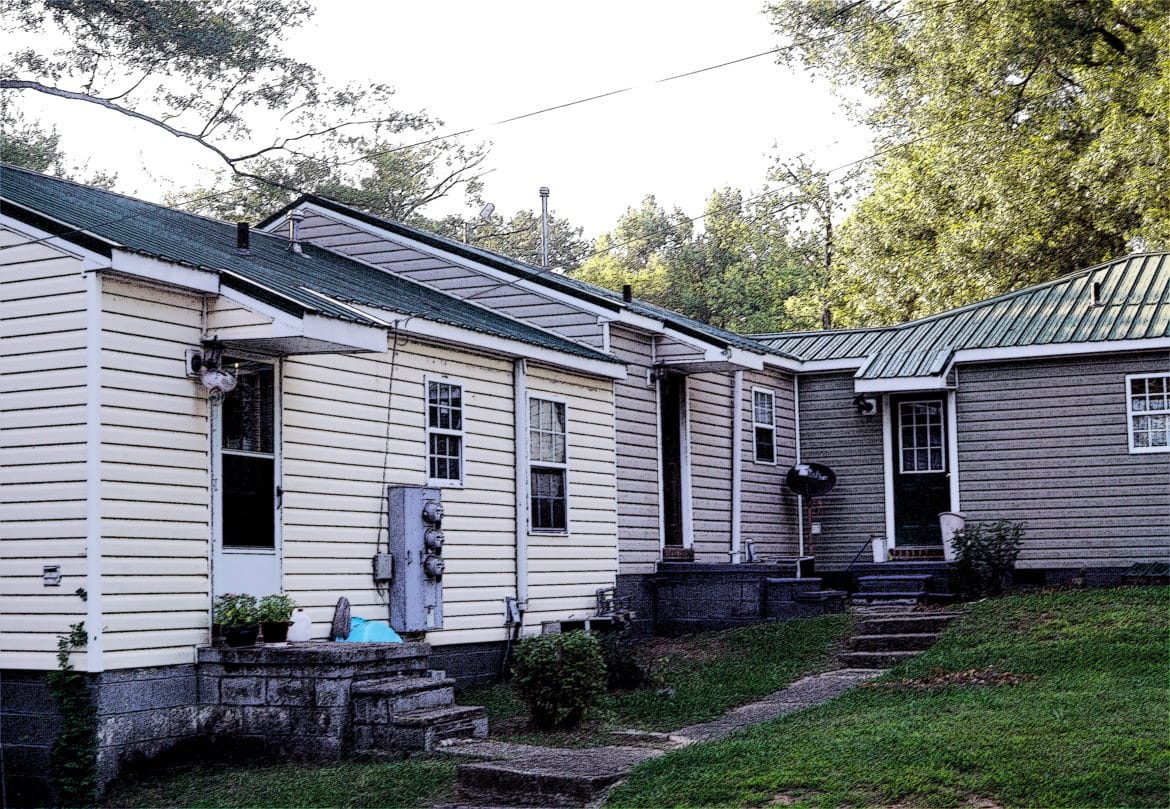 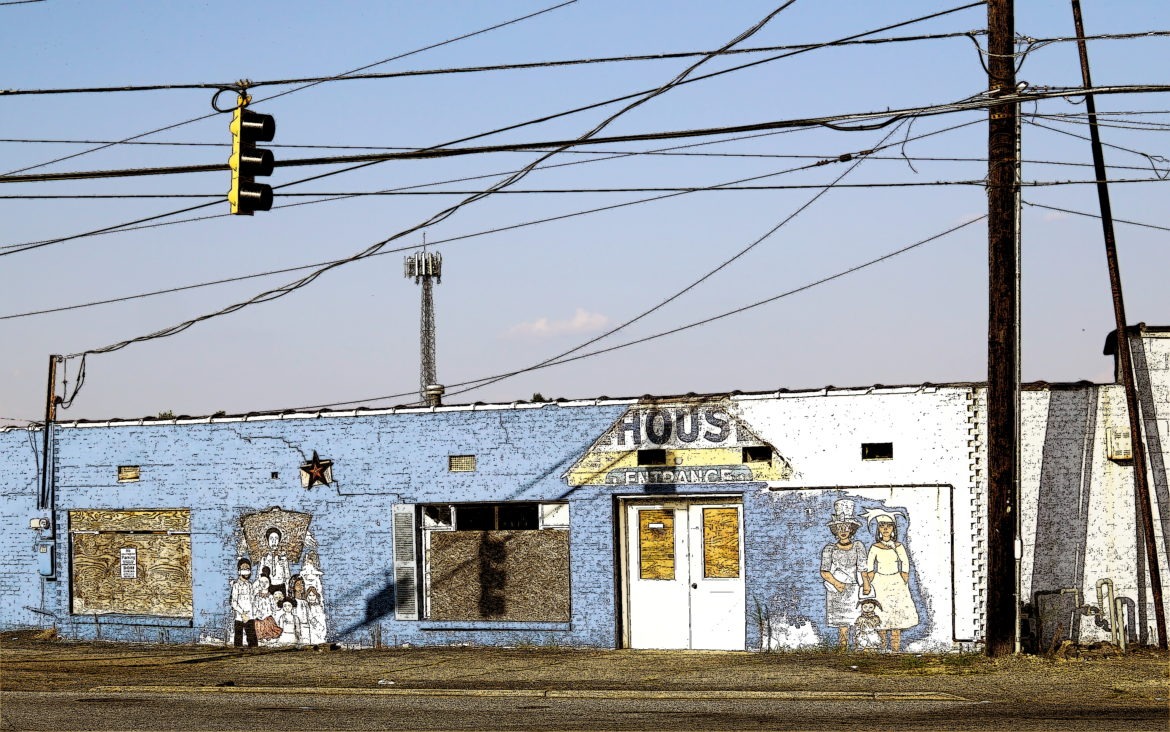