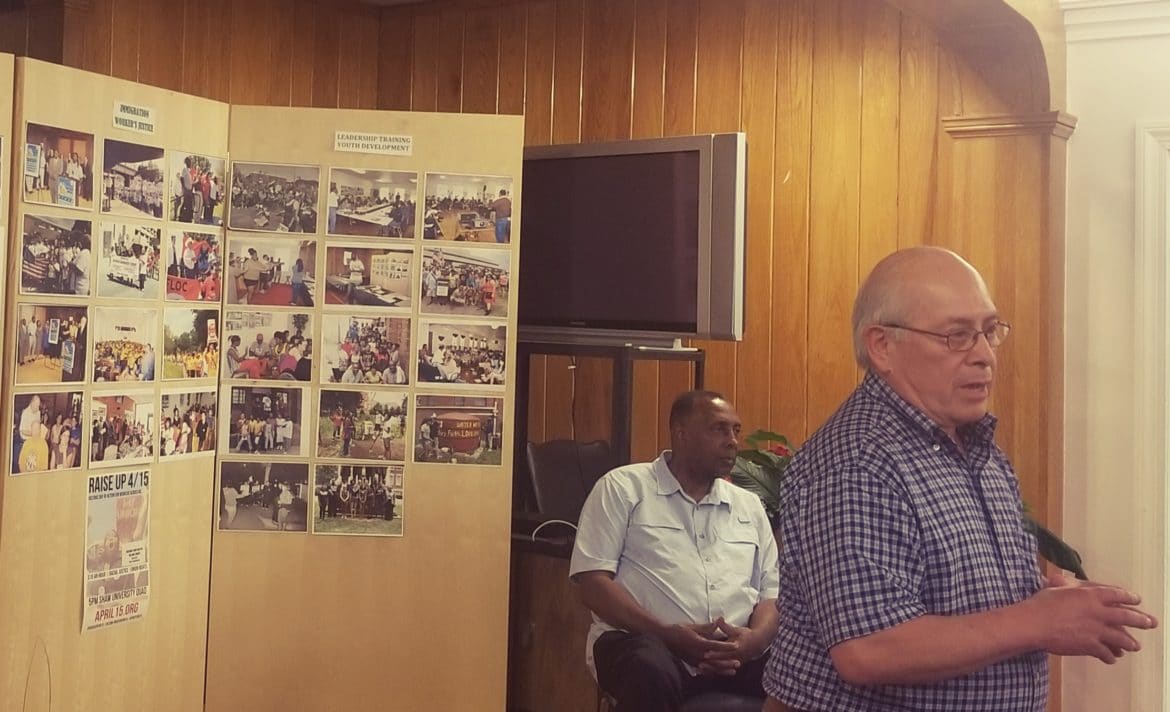 FLOC (Farm Labor Organizing Committee, AFL-CIO) and its allies brought a sizable contingent of supporters down from Toledo, Ohio to North Carolina this week. The purpose of their North Carolina tour was to explore the intersections between Black and Brown struggles for justice. The Black/Brown Unity Coalition’s first stop was Greensboro on Thursday. The Black/Brown Unity Coalition visited the International Civil Rights Center in the morning. Later in the day, they came to the Beloved Community Center for food and fellowship.

After the getting steeped in the history of the Civil Rights movement, the group journeyed to the tobacco fields of Eastern North Carolina Friday to witness the harsh and often inhumane conditions that tobacco workers endure. FLOC is the principal group fighting for the rights of Latinx farmworkers who are denied legal protections that most of us take for granted.

“Farmworkers in the United States endure conditions of structural violence, including deplorable wages and endemic poverty, forms of stigma and racism, occupational health and safety hazards, poor health and limited access to services, and the constant threat of deportation.”

The BCC has marched with FLOC through the streets of Winston, part of FLOC’s March on Reynolds Campaign. They have supported FLOC’s efforts to secure decent workplace and housing conditions for farmworkers.

But Reynolds American (now a subsidiary of British American Tobacco) has for years rejected FLOC’s demands to ensure that their supply chain is cruelty-free. FLOC and Oxfam have documented the deplorable conditions predominately migrant workers endure in Eastern North Carolina’s tobacco fields.

FLOC’s efforts on behalf of Brown farmworkers haven’t been ignored by conservative NC politicians. In 2017 our woefully unprogressive state passed the North Carolina Farm Act of 2017, a bill meant to cripple FLOC’s ability to collect union dues in NC. The General Assembly of the least unionized state in the union is clearly on the side of Big Tobacco. They’re trying to break FLOC’s ties to the state’s migrant farmworkers. 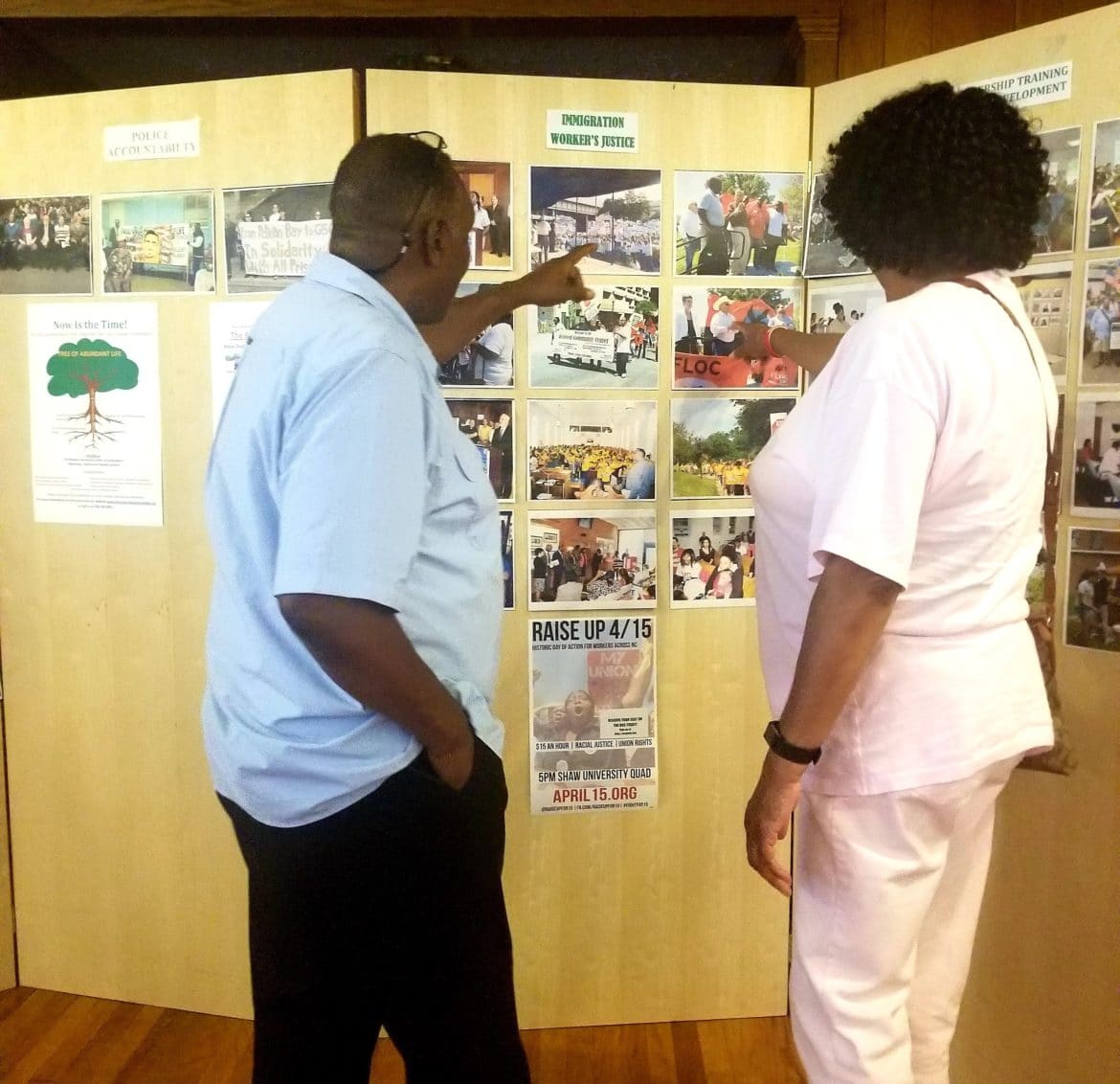 Big Tobacco has more than enough money to subsidize worker safety and decent housing on the farms that grow the tobacco that makes its profits possible. The tobacco industry, like most of corporate America, is awash with money, due in-part to Trump’s massive tax cuts.

Reynolds American in the last few years has participated in two multi-billion-dollar mergers and acquisitions. In 2014-2015, it acquired Lorillard for $27 billion and spun-off several of its lackluster brands (Winston and Salem among them) to Imperial Tobacco. Then in 2017, British American Tobacco purchased the roughly 60 percent of Reynolds American that it didn’t already own for nearly $50 billion.

An industry that can throw billions of dollars around its various boardrooms can undoubtedly spread some of that wealth around to the tobacco fields of the American South. FLOC’s Reynolds Campaign has exposed the moral hypocrisy of Reynolds. FLOC’s work for farmworker justice is an important civil rights/human rights campaign that ordinary Americans need to familiarize themselves with and support.

After serving supper to the Black/Brown Unity Coalition, the Beloved Community Center shared their history with the group. Rev. Johnson and FLOC president and founder, Baldemar Velasquez took turns describing their struggles working for civil rights and human rights.

The evening ending with Baldemar Velasquez leading the group in several choruses of Woke Up This Morning (With My Mind Stayed On Freedom).

The evening was a wonderful gathering of Black/Brown allies. FLOC’s history of struggle on behalf of Latinx farmworkers was inspiring, as was The BBC’s work for racial and economic justice. Connecting the Brown farmworker struggles with the Black Civil Rights struggle was profound.

The Beloved Community Center is an inspiring place. The walls of the BCC cry out for justice. But as Rev. Johnson spoke about Greensboro’s history, from the February 1 sit-in that launched the Civil Rights movement to the 1979 Greensboro Massacre to the Greensboro Truth and Reconciliation Commission, my mind drifted to Winston’s history.

I told Mr. Velasquez, as the meeting was breaking up, that I thought the work that FLOC with its promotion of Black/Brown unity was engaged in is civil rights unionism (combining civil rights with labor organizing).

Civil Rights Unionism is the term that historian Robert Korstad coined to describe the campaign to unionize R.J. Reynolds Tobacco Company in 1940s Winston-Salem, by the mostly African American members of Local 22 (of the Food, Tobacco, Agricultural and Allied Workers of America-CIO).

Local 22 organized the R.J. Reynolds Tobacco Company during the depths of Jim Crow segregation, at a time when Reynolds was at the height of its economic and political power.

Robert Korstad, the historian who resurrected Local 22’s struggle from the dustbin of history, called Local 22, “a very different and broader vision of a unionization than had been attempted before.” Beyond public accommodation, civil rights unionism is equally concerned with fair wages and worker’s rights.

Labor and civil rights activists proved to be a powerful combination in Winston. They sought and won for a time, workplace protections, higher wages, and voter rights for African-Americans.

Local 22’s practice of combining labor rights and civil rights lives on in the work that FLOC and the Beloved Community Center are engaged in. Racism and economic exploitation go hand-in-hand.

Reynolds continues to exploit workers, today, but Reynolds has moved its exploitation from its factories to the farms that grow its tobacco. It’s massive, high tech plant at Tobaccoville is a marvel. It produces 10,000 cigarettes a minute. Machines do the work that Black laborers did by hand decades ago.

Back during the golden age of R.J. Reynolds Tobacco Company, it was African Americans in Reynolds’ factories that suffered some of the same conditions that Latinx farmworkers endure today; unsafe and unsanitary workplace conditions, frequent harassment by foreman and various other Jim Crow indignities.

They were migrants to the city, who settled in East Winston. They were either recruited by Reynolds or came to Winston on their own accord to escape rural poverty, especially sharecropping. They created the wealth that built Winston’s finest neighborhoods.

Today, such factory conditions wouldn’t be tolerated, but they are routinely ignored in the tobacco fields of Eastern North Carolina. It’s important that we support FLOC’s Reynolds campaign.

Whether you’re black, brown, white, yellow or any shade in between, it’s important that you support farm workers who produce the food on our plates and the tobacco in our favorite pack of smokes.