Recently, baseball great Hank Aaron died at age 86. The celebrated home run hitter overcame a shameful barrage of racist hostility when he broke Babe Ruth’s home run record on April 8, 1974, in Atlanta. It’s time for the Atlanta Braves to change their name to the Hammers, in honor of “hammering” Hank Aaron.

In the wake of Aaron’s death, the Journal posted some articles on Aaron’s visits to Winston. The Journal seems to do a better job of looking back than looking forward these days. Who the hell knew that Aaron signed his first professional contract at the City’s Union Station? Or that Hank Aaron was at the 2007 groundbreaking for BB&T Ballpark (now Truist Stadium). Aaron was brought to BB&T Ballpark’s groundbreaking to whitewash the elimination of the Watkins Street neighborhood. Surely, Aaron was unaware that the last of the African American West End had been destroyed for the City’s new ballpark.

“In some ways, the Watkins Street neighborhood is the forgotten part of the city. It is cut off from everything. The people there have been struggling for a long time to get something done in that area.” -Winston-Salem Chronicle, 1982

One interesting historical tidbit that the Journal didn’t report was Aaron’s endorsement of Camel cigarettes. I bring this up not to malign Aaron but to make a larger point. Back in 1962, when Aaron endorsed Camel cigarettes, he was hardly alone. Celebrity cigarette ads were ubiquitous at that time. Tobacco and baseball were intertwined, and even doctors endorsed cigarettes! 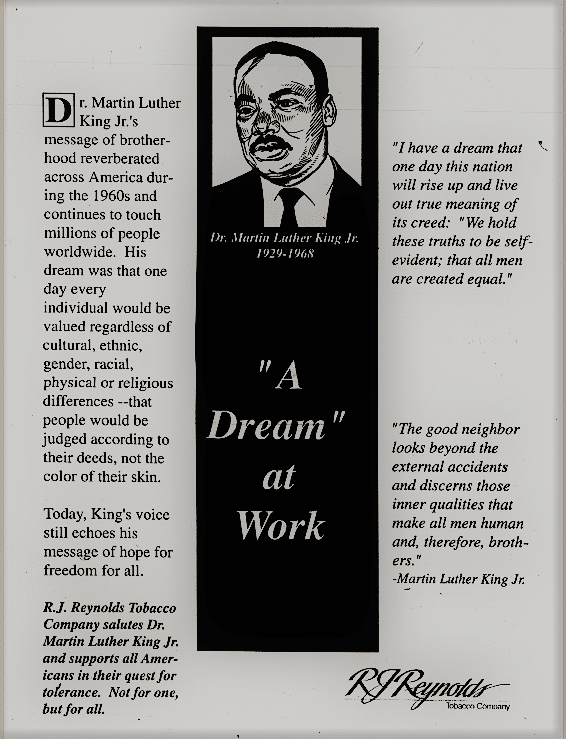 Offensive RJ Reynolds Advertisement, It Puts The Slain Civil Rights Leader On The End Of A Cigarette.