Saturday, Mayor Allen Joines, members of the city council, various other local officials and community members gathered in Happy Hill for a historical marker unveiling, but the dirty truth about Winston’s oldest African American neighborhood was not mentioned.

The marker honored both the Brothers’ Spring and the African School, which were adjacent to each other, near where the Alder’s Point Apartments are currently located. Both were lost to development years ago.

The African School, as it was called at the time was the first school in the country built for African Americans after the Civil War. It’s the product of freedmen, a testament to how much they valued education and their determination to ensure their children had better lives. It is a real shame that the African School isn’t with us.

It would great if the first school for African Americans in Forsyth County had been preserved like the Boy’s School in Old Salem was preserved. Old Salem is currently restoring the Boy’s School and will soon make it a part of Old Salem’s tours. But nothing in Happy Hill, Winston’s oldest African American neighborhood has been preserved. Historical markers in Happy Hill are a crude reminder of what’s been lost. 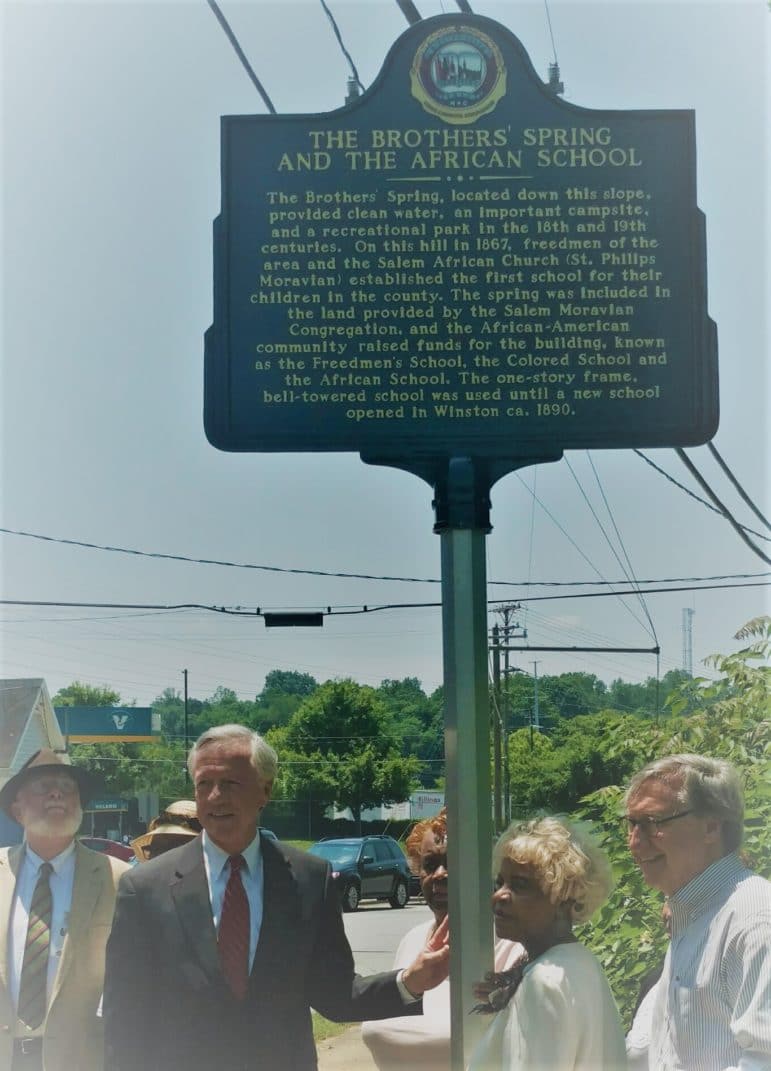 Everyone who spoke Saturday had something positive say. They all spoke of the good work Winston was doing preserving and honoring its history. They spoke of the Moravian traditions and the value of Happy Hill. No one mentioned the fact that Happy Hill has been razed and gentrified (a process that is still unfolding). Sadly, only fragments of a once vibrant, proud, black neighborhood with roots stretching back to the days of slavery remain.

Many of the people gathered at the historical marker unveiling, no doubt realize the significance of Happy Hill. But most folks in Winston have no idea just how important Happy Hill is.

Just across the creek from Salem, Happy Hill was originally used by Moravians for farming purposes. When Moravians betrayed their pious belief system and embraced slavery, Happy Hill was used as a town plantation and slave quarters. In 1814, Dr. Frederich Schumann made his home at Happy Hill.

Over the years Dr. Schumann’s plantation and enslaved “family” grew. Eventually, Dr. Schumann made plans to emancipate all his enslaved African Americans. Several of them were among the earliest American settlers in Liberia. President Johnson Sirleaf of Liberia visited Happy Hill last year to honor the historic ties between Happy Hill and Liberia.

Most people freedmen didn’t go to distant Liberia. They stayed at Happy Hill after Emancipation and bought land in Happy Hill. By the 1920s they had created a solid black community. A community that could have thrived if it hadn’t been destroyed by racists government planners at the federal, state and local levels beginning in the 1950s.

No one mentioned the fact that Happy Hill, despite its wealth of history, hasn’t been preserved. In fact, it’s been sacrificed during the same time period that Old Salem was reclaimed and preserved at great expense.

In the 1950s, many homes in Happy Hill were razed to accommodate Happy Hill Gardens, the city’s first public housing units. In the 1960s Highway 52 was routed through Happy Hill. St. Phillips Moravian, one of the oldest Black congregations in the United States was forced to relocate to Bon Air Avenue. A large portion of graveyard adjacent to St. Phillips was also relocated.

But redeveloping Happy Hill Gardens and removing most of its residents was a death-blow to Winston’s oldest African American neighborhood. It was blatant gentrification. Happy Hill Gardens could have been rebuilt better than ever. But government planners and developers in Winston wanted to rid the area of black people. 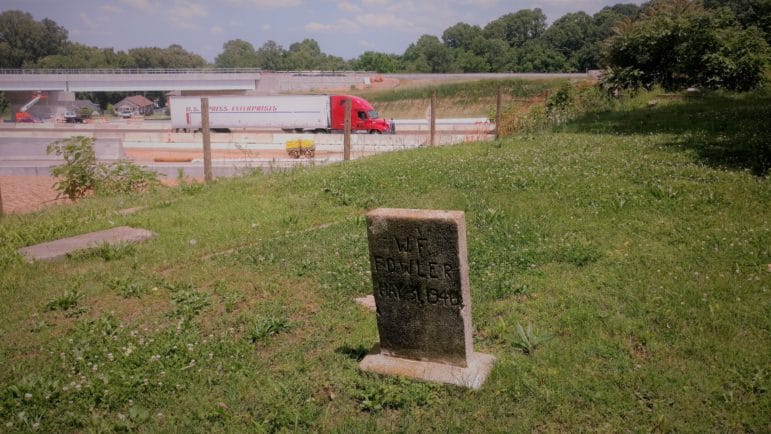 They used Bill Clinton’s Hope VI program to remove black people from their neighborhood. The redevelopment of Happy Hill Gardens to Providence Place and two other low-density apartment complexes paved the way for development adjacent to the UNC School of the Arts and Old Salem/Salem College.

Happy Hill is an important local historical site, but it’s also the scene of a crime. Historical markers are great, but Winston-Salem’s City Council and the Forsyth County Board of Commissioners should each publicly apologize for the damage that each of their respective governing bodies has done to the Happy Hill.