Kaleideum: say hello to higher taxes in Forsyth County. Say goodbye to any county-wide education or anti-poverty initiatives that could have been funded with $30.5 million.

The Forsyth County Commissioners just approved an extremely generous subsidy to Kaleideum, by a 5-2 vote. This outcome was not surprising. But it was disappointing, and it will limit Forsyth County’s budgetary options for years to come.

I blame the Confederate statue that for the moment, still resides at Liberty and Fourth. The County Commissioners should have listened to Walter Marshall and moved that racist statue when they sold the old courthouse to developers in 2014. The debate over Winston’s Confederate statue has overshadowed debate on  Kaleideum. If that statue wasn’t at Liberty and Fourth today, there is a better chance that the Journal, The Chronicle, and Triad City Beat would have been more critical of Kaleideum.

I’m not sure who is going to take Commissioner Don Martin out for a steak dinner first. But Kaleideum, Blum construction, and Stitch design all owe Don Martin. The Kaleideum board member just put a lot of money into their pockets.

It’s sad when a local official can ram his or her pet project through an elected body with little to no regard for the taxpayers’ money. Martin would like taxpayers to believe that the County can sell surplus properties, move some money around, and painlessly fund Kaleideum to the tune of $30.5 million.

Martin is insulting our intelligence. He’s also ignoring the county’s most pressing needs. Thanks to Commissioner Don Martin, we’re funding another Downtown Winston-Salem project instead of using the County’s limited funds to address poverty and failing schools in Winston-Salem/Forsyth County’s urban core.

Thursday’s meeting of the Forsyth County Commissioners began with a prayer, followed by the Pledge of Allegiance. The Commissioners should have opened their meeting with a moment of silence for their many constituents who are living in poverty, and all the at-risk school children in Forsyth County that would have been better off if they were born practically anywhere else in the United States.

Instead of pledging allegiance to a flag, the Commissioners should have pledged not to subsidize the rich, but instead, to do the most that they could do at the county level to aid those in need. 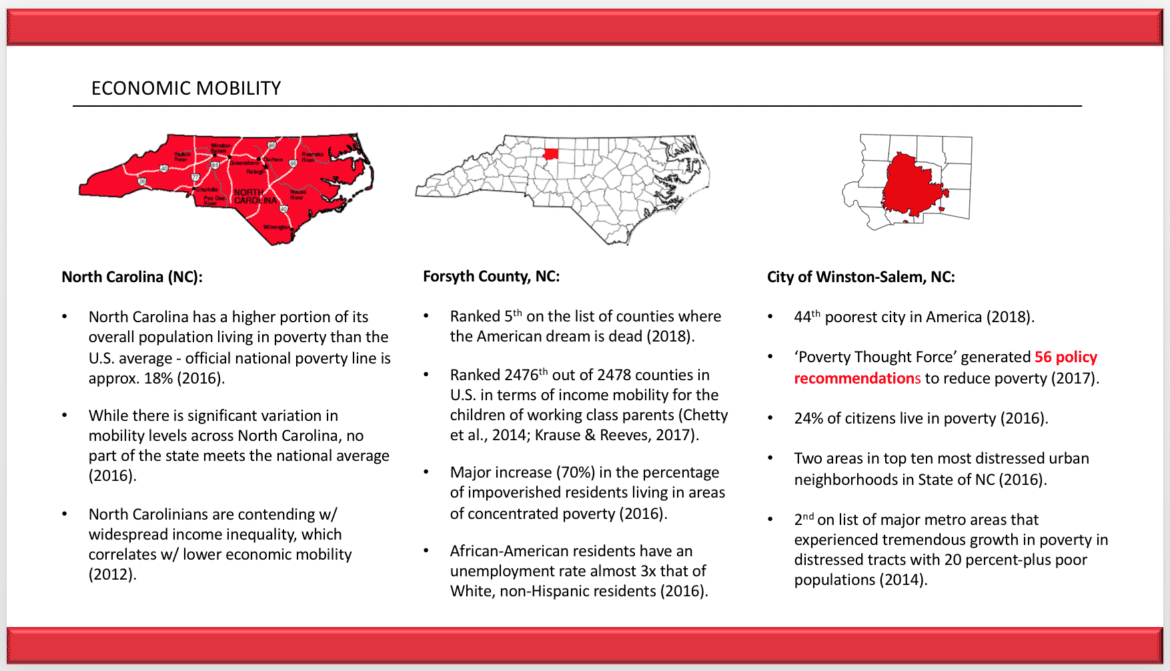 Center for the Study of Economic Mobility

Source: Center for the Study of Economic Mobility, WSSU

But subsidizing wealthy interests is what government does on every level. The Commissioners began their agenda by giving a few hundred thousand to Medline, a multi-billion dollar medical supply company. Then they signed off on a local charter school issuing $30 million in bonds. Afterward, the Commissioners retired some debts to allow the County’s balance sheet to say hello to Kaleideum.

Next, the Commissioners gave $325,000 to Creative Corridors for the work they did on the Twin Arches and Salem Creek Connector Construction. In Winston-Salem/Forsyth County we haven’t bridged the racial and socio-economic divide that separates East Winston from the rest of the city. But we do dress it up nicely.

After a few more items on the agenda were passed with limited debate, Kaleideum funding finally came up for a vote. You can follow along on the County’s website. The Kaleideum debate begins at the 51:12 mark.

I have previously criticized Forsyth County for giving $30.5 million to fund another downtown Winston development. There are so many good reasons to oppose Kaleideum’s $30.5 price tag.

But only Republicans Gloria Whisenhunt and Richard Linville voted against Kaleideum. If at-large Democrat, Ted Kaplan, and Tonya McDaniel and Fleming El-Amin (Democrats representing District A) had voted together with Whisenhunt and Linville, then Kaleideum wouldn’t have received the full $30.5 million.

Before voting for the biggest subsidy any non-profit has received from the City or County the Democrats on the Board offered little opposition to Kaleideum. Once again, they let Kaleideum board member, Don Martin frame the debate and set the agenda on Kaleideum.

Ted Kaplan questioned what effect gifting Kaleideum $30.5 million would have on the County’s tax rates. Fleming El-Amin asked, how much fundraising Kaleideum would be responsible for? Tonya McDaniel questioned “robbing Peter to pay Paul,” but praised Kaleideum’s outreach to children in need, and said, “you just can’t go wrong investing in children.”

Kaleideum’s Executive Director, Elizabeth Dampier did a masterful job selling her museum as accessible and beneficial to underprivileged children in Forsyth County.

And that’s all it took for Democrats to support another downtown project will further the divide between Downtown Winston and East Winston. A new, downtown Kaleideum will only add to existing structural racism in Forsyth County instead of working to dismantle it.

Elizabeth Dampier happened to mention at yesterday’s County Commissioners meeting that the Schiele Museum of Natural History in Dallas, North Carolina is publicly owned and operated by the City of Dallas. Commissioner Kaplan mistakenly thought that Dampier was employed by Schiele before taking over at Kaleideum. In actuality, Dampier worked at a nearby museum.

But I think Kaplan for confusing Dampier’s work history and inadvertently informing the Commissioners that public ownership of museums is possible. For $30.5 million, Forsyth County should own Kaleideum outright.

I’ve never been to Dallas, North Carolina. But after today’s Kaleideum vote I’m considering moving there. I want to live in a community that draws a hard line between public and private entities.

It’s frustrating living in a city that owns a downtown baseball park that private developers have cashed in on. I’d love to live in a county where one children’s museum and one science museum doesn’t equal $30.5 million in tax dollars.

There are so many other pressing needs in Winston-Salem/Forsyth County, giving $30,500,000 to Kaleideum is taking food off the plates of the food insecure in Forsyth County. It’s a luxury that Forsyth County can’t afford. But somehow Democrats on the Board of Commissioners can’t see that.