Bass came to R.J. Reynolds in 1968, after a highly successful military career. He was the first African American member of management at R.J. Reynolds.

Working in personal, Marshall Bass was tasked with modernizing Reynolds’ practices of promotion and advancement. This initiative likely had more to do with civil rights legislation that held Reynolds legally liable for discrimination than R.J. Reynolds’ so-called “benevolent paternalism.”

The Path of My Pilgrimage: The Autobiography of Marshall Brent Bass (2003), is an excellent first-person examination of racism in our community, from the late 1960s into the 1980s. Two generations ago, racist barriers to Black employment and advancement at the city’s largest employer were very real. Here’s an excerpt from The Path of My Pilgrimage:

It took little time for me to observe and isolate my concern that 98 percent of the black employees (about a third of the company total of  nearly 16,000) were concentrated at the bottom of the workforce-in labor grade three or below, out of nine labor grades. Generally, these black employees had more seniority than the whites in the same grade and most had as much or more educational attainment than whites. Blacks were conspicuously absent in supervisory positions. I had never seen anything like this in the military, even at its worst.” -Marshall Bass, page 220

Bass didn’t mention the unionization of R.J. Reynolds in the 1940s. If R.J. Reynolds had worked with the brave women and men of Local 22, instead of using the company’s substantial resources to discredit and ultimately crush Local 22, then Reynolds’ wouldn’t have been a separate and unequal workplace in 1968. Bass can be forgiven for failing to mention Local 22. Their struggle was largely forgotten for decades until Robert Korstad’s masterwork, Civil Rights Unionism, was published in 2003.

The Path of My Pilgrimage also gives an excellent account of how residential segregation was practiced after the civil rights era. Path of My Pilgrimage recounts how Bass came to build a home in the Carver School neighborhood, instead of say, Buena Vista, like other members of R.J. Reynolds’ management. Bass’s autobiography gives the specifics of white, racist neighbors being unnerved when a Black man dared to look at a house in “their neighborhood.” Bass recalls how realtors would only help him on one side of 52, but not the other. How his perfect diction on the phone with agents couldn’t mask his Black voice, leading the voice on the other end of the line to end the conversation with, “sorry, but that property is no longer available.” When Bass decided to build a home, he was denied a mortgage loan by several lenders and eventually had to accept a loan that wasn’t as generous as the loans his fellow managers at Reynolds received.

Marshall Bass crafted a training and promotion system at Reynolds that eliminated the worst practices of the city’s signature employer. But with production no longer in Winston-Salem, but instead concentrated in rural Tobaccoville-Reynolds’ wealth still disproportionately flows into the hands of white workers today.

Marshall Bass eventually became an elected official on R.J. Reynolds’ board. The infamous, H. Ross Johnson generously bumped Bass’s salary and retirement benefits up before R.J.R/ Nabisco’s leveraged buyout. Bass, to his credit, gave much of his wealth back to the community. Bass was a significant fundraiser for Winston-Salem State University. He was also instrumental in raising funds for the construction of the East Winston YMCA. 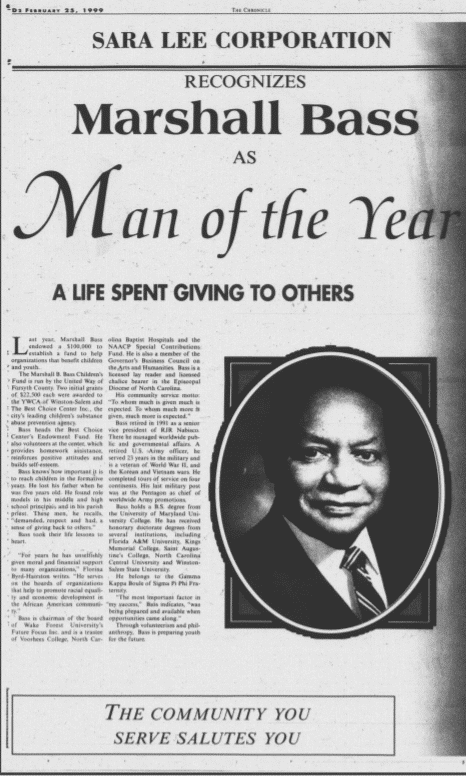