“The unfortunate reality is that most affordable housing looks exactly like what it is and adds to boundaries that quietly separate race, culture, and class.”

In 2003, the Southeastern Center for Contemporary Arts (SECCA) launched an ambitious undertaking, with the goal of nothing less than re-imagining affordable housing. SECCA invited architects from around the world to submit housing designs that were inexpensive and easy to build, but also artistically compelling and environmentally friendly. SECCA’s Home House Project was a smashing success. But over 15 years later, here in Winston, we have little more than a modest new park on Second Street and a remarkable book by MIT Press to show for SECCA’s efforts to produce a blueprint for innovative, affordable housing units.

In the end, SECCA’s efforts to rewrite the rules of affordable housing was no more successful than R.J. Reynolds’ efforts to produce and market a smokeless cigarette in the late 1980s. The Premier was a supposedly safer, smokeless cigarette, but it was almost universally unpopular with smokers who tried it. Premier’s failure was a very public disaster for Reynolds, leading to massive job cuts, and the shelving a cigarette brand Reynolds spent a fortune developing.

SECCA’s Home House Project suffered a much quieter death. The fault lies not with SECCA, but with local, entrenched capitalist interests who profit from over-priced housing.

The Home House Project simply faded away as the Winston-Salem City Council and developer(s) lost interest in the project over time. Today the Holly Avenue neighborhood has the new Second Street Park. But that site could have ushered in a new era of 21st Century public housing in Winston.

The best account that we have of why the land designated for the Home House Project houses is now a neighborhood park comes from the Winston-Salem Journal’s Laura Graff. Graff’s November 2011, “Neighbors call for a park in long-vacant lot” article recounts that in “April 2005, the council agreed to sell five lots at Second Street and Shady Boulevard to [Bill] Benton’s company for $25,000 each.” Sadly, Bill Benton (according to the city’s documents) never planned to build environmentally friendly affordable housing units on Second Street.

Years went by. The housing market crashed in 2008. The homes inspired by the Home House Project never materialized.  The City Council could have moved forward with a different developer. Instead, they built the Second Street Park. I hope Holly Avenue residents enjoy their new park, but the City of Winston-Salem missed a golden opportunity to address affordable housing in our city.

I suppose Winston-Salem Alliance President and Mayor, Allen Joines was too busy working to develop luxury apartments in Winston to see the work of SECCA’s Home House Project through. Mayor, Joines loaned millions of dollars to fund the Nissen building’s redevelopment, and in his capacity as W-S Alliance President, he made sure that the Millenium Fund gave millions more in loans to ensure luxury apartments were built on West Fourth Street.

And that’s just one project the Winston-Salem Alliance’s Millennium fund supported. (The Millennium Fund, “a civic war chest, raising $44 million in nine months, to shore up the downtown development corporation and make catalytic investments throughout downtown” –Politico). Instead of prioritizing innovative, affordable housing Allen Joines and his associates in the public, private, and non-profit sectors rebuilt the Innovation Quarter and all of Downtown Winston with virtually no affordable housing.

SECCA’s Home House Project houses were never built in Winston, but West Salem Moderns were built relatively nearby, but they weren’t built for the poor.

With soaring rents, the case for houses inspired by SECCA’s Home House Project is stronger now than ever. Nearby BB&T Ballpark’s opening in 2010 has led to gentrification in both West Salem and Holly Avenue.

In 2016, the apartment building adjacent to the Second Street Park was redeveloped into The Livery Apartments; 535 square ft apartments ranging from around $800 to nearly $1000. That’s too damn much for such a small space.

It seems that in Winston, SECCA’s Home House Project lost to Allen Joines’ Downtown Winston-Salem redevelopment project. City leaders have rejected the working class, in favor of the “creative class.” Now, in 2019 we are left with rents throughout Winston, put particularly in Downtown Winston that are excessively high, leading to food insecurity and an appallingly high eviction rate.

I encourage anyone who is interested to read SECCA’s Home House Project: The Future of Affordable Housing; it’s an insightful examination of affordable housing and a blueprint that could still be enacted in Winston and elsewhere. 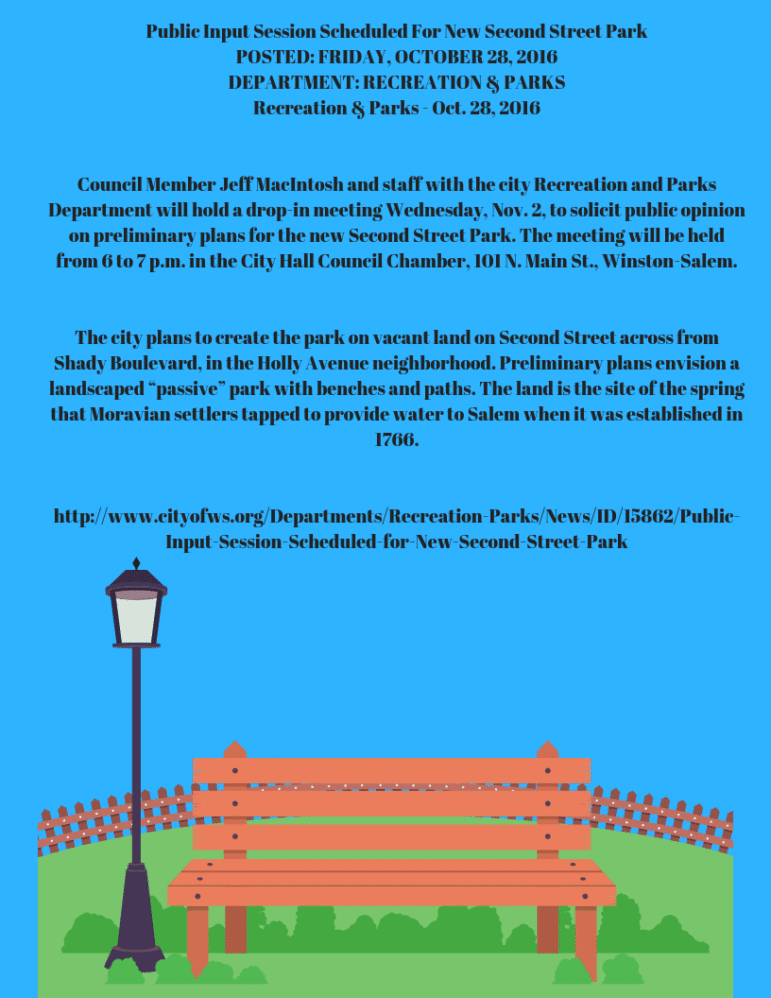 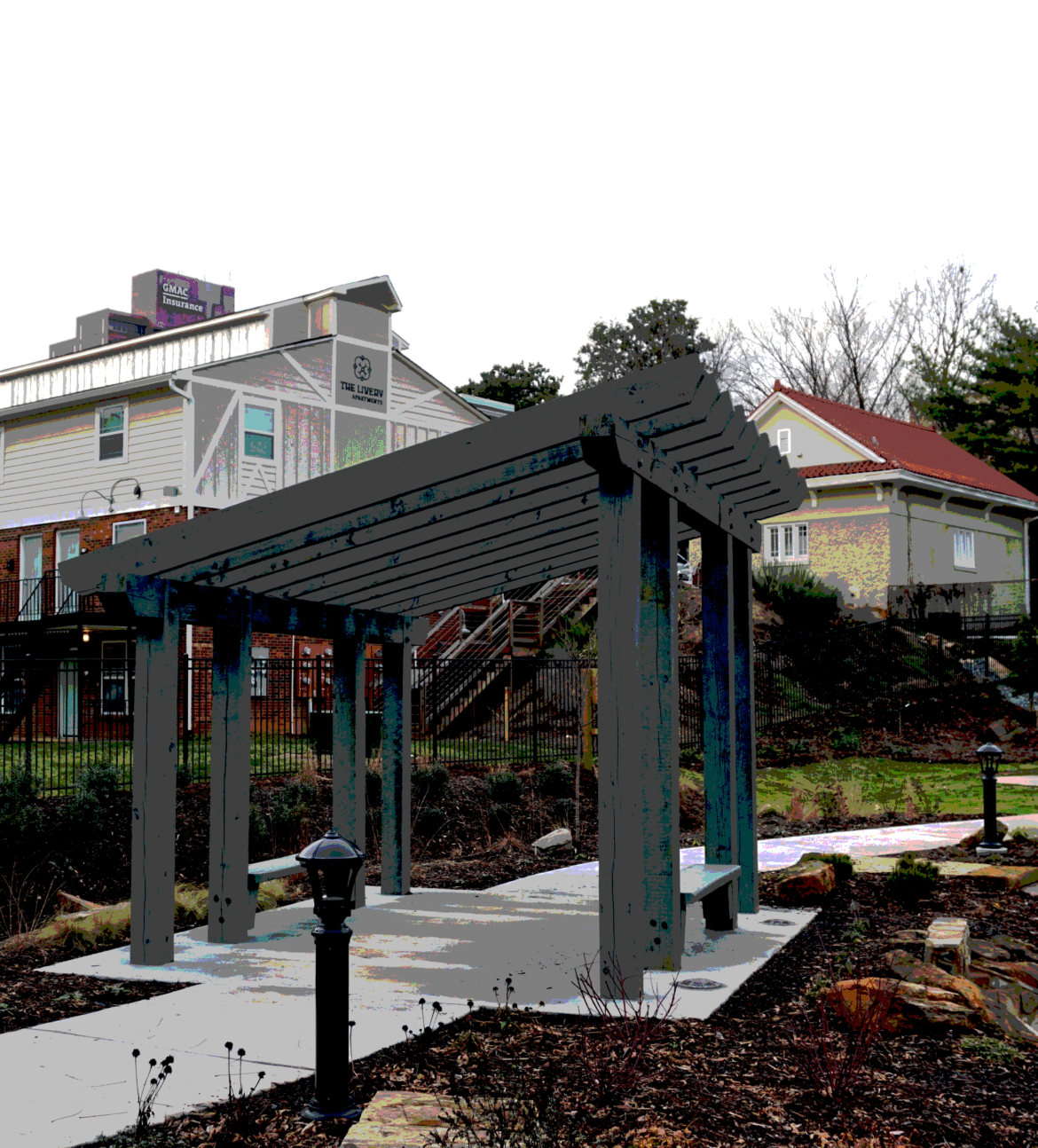 Second Street Park, The Livery Apartments on the other side of the fence.