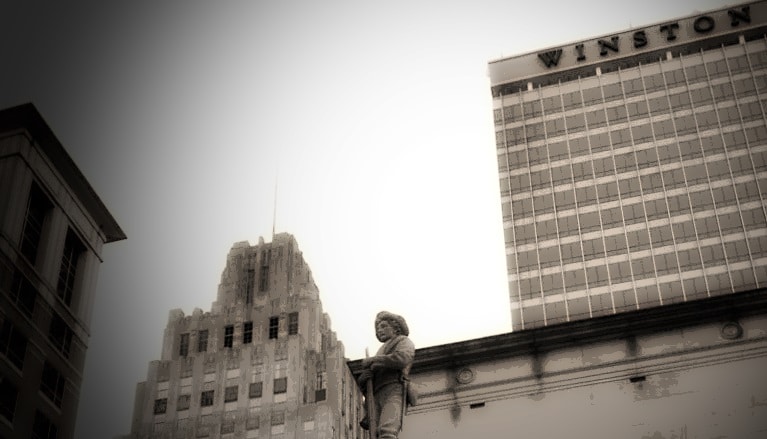 The United Daughters of the Confederacy is asking Winston-Salem for a 60-day delay in filing any legal action to force removal of the Confederate statue at the corner of Fourth and Liberty streets on the grounds of the former Forsyth County Courthouse.

James Davis, attorney for the UDC’s North Carolina Division, told City Attorney Angela Carmon in a letter dated Jan. 25 that there are questions about the ownership of the statue and whether allegations that the statue is a public or private nuisance are legally valid.

-Confederate statue backers (who may or may not own it) ask city to hold off on forcing a move for the memorial, Wesley Young Winston-Salem Journal

If the UDC succeeds in delaying Mayor Joines’ plan to move the Confederate statue from Downtown Winston to Salem Cemetary, it’s time for Joines to implement his backup plan.

On January 1, Joines made headlines by stating the City’s intention to move the rebel statue at Fourth and Liberty to Salem Cemetary. What got less attention was Joines contingency plan to place a plaque in front of or near to that racist statue making it clear that the City of Winston-Salem doesn’t approve of its presence in Downtown Winston.

A public shaming of the Confederate statue at Fourth and Liberty would be a great way to say “off to the graveyard” to a public symbol of racism, violence, and white supremacy that has stood in Downtown Winston since 1905.

It’s hard to imagine a better way to celebrate Black History month than publicly shaming that racist, rebel statue that for so many years stood largely unchallenged as Joines promoted the downtown properties all around it.

As February 1 fast approaches, the mayor must not delay in keeping his promise. He should present the City Council with the plaque that he’s been working on at next Monday’s City Council meeting. Until that racist statue falls (or is relocated away from the city’s center) a plaque must go up to set the record straight!

While the City is putting the finishing touches on its anti-racism plaque, perhaps students and faculty at Wake Forest can work on an anti-racism plague for the city’s flagship, white university.

Professor Melissa Harris-Perry’s rebuke of WFU’s Jim Crow roots should be the starting point for a plaque by which Wake acknowledges that it is a university born in the Jim Crow era, that directly benefited from the subjugation and exploitation of African Americans (that’s where the vast resources required to move Wake Forest to Winston came from).

Wake’s Mea culpa plaque could be placed near the historical marker on Silas Creek honoring Five Row, an African American neighborhood just outside of Wake Forest’s gates that was demolished in 1961.

Signs of Winston’s Jim Crow past and current separate and unequal state are present throughout Winston; you only have to look for them. But a sign at or near Winston’s Confederate statue knocking Johnny Rebel down a few notches would serve as a needed counternarrative to that racist statue. Hopefully, it would spark a community-wide debate about the systematic racism in Winston, and steps we can take to make Winston-Salem/Forsyth County a better place for all its residents, regardless of race or socio-economic status.

In accordance with our role of studying issues of discrimination and advising the Winston-Salem City Council on how we can best promote a culture of equity and inclusion throughout the City, the Winston-Salem Human Relations Commission (“WSHRC”) expresses our strong support for the position of the Mayor and the City in calling for the immediate removal of the Confederate monument located at 4th Street and Liberty.

From its dedication in 1905 to the present day, the Confederate monument at the old courthouse has served as a symbol of oppression, subjugation, and intimidation of persons of color in our City. The monument at 4th Street and Liberty declares that Confederate soldiers served as heroes. However, the WSHRC can find no heroism in this cause, nor can it find any heroism in the white supremacist ideology behind the monument’s original construction. In our perspective, this Confederate monument has served the purpose of perpetuating a historical fiction, which whitewashes the brutality of the Confederacy and ignores the true toll its legacy has had on African-American citizens and our national consciousness.

Memorializing the Confederate soldier, next to a public square, deliberately perpetuates the myth that the Southern cause in the Civil War was just and that slavery was nothing more than a necessary, perhaps even benevolent, institution. To members of the WSHRC, it is clear that this cause was unjust and that the institution of slavery was abusive, cruel, and inhumane.

Through the removal of this symbol of oppression and subjugation, it is our hope that our City can continue on the journey of racial reconciliation for the benefit of all of our citizens and residents. Winston-Salem is a dynamic and diverse city that is growing in many powerful ways. In this process of growth, we need to ensure that we plant our feet firmly on the authentic side of history and create an environment where all of our citizens and residents can live and thrive in spaces advancing inclusion and equity.