Recently the Triad Business Journal released its 2019 Triad Power Players list. These are the women and men who get projects in the Piedmont done-often for their own benefit and the benefit of others like them. Some members of the Business Journal’s Triad Power Players, such as High Point University President, Nido Qubein, hold high profile positions. Other members of the Business Journal’s elite list, such as Ben Sutton Jr., fly below the radar unless he’s writing an eight-figure check to his alma mater.

It’s interesting how the majority of the members of the Triad’s business class and their non-profit, academic, and government allies operate exclusively in one city or another, but almost never in all three of the Triad’s cities.

Each city in the Triad has its power structure, institutions, and institutional players unique to the respective cities. Largely unaccountable institutions breed relationships that both justify and facilitate our tax dollars funding this privileged class, both directly and indirectly. 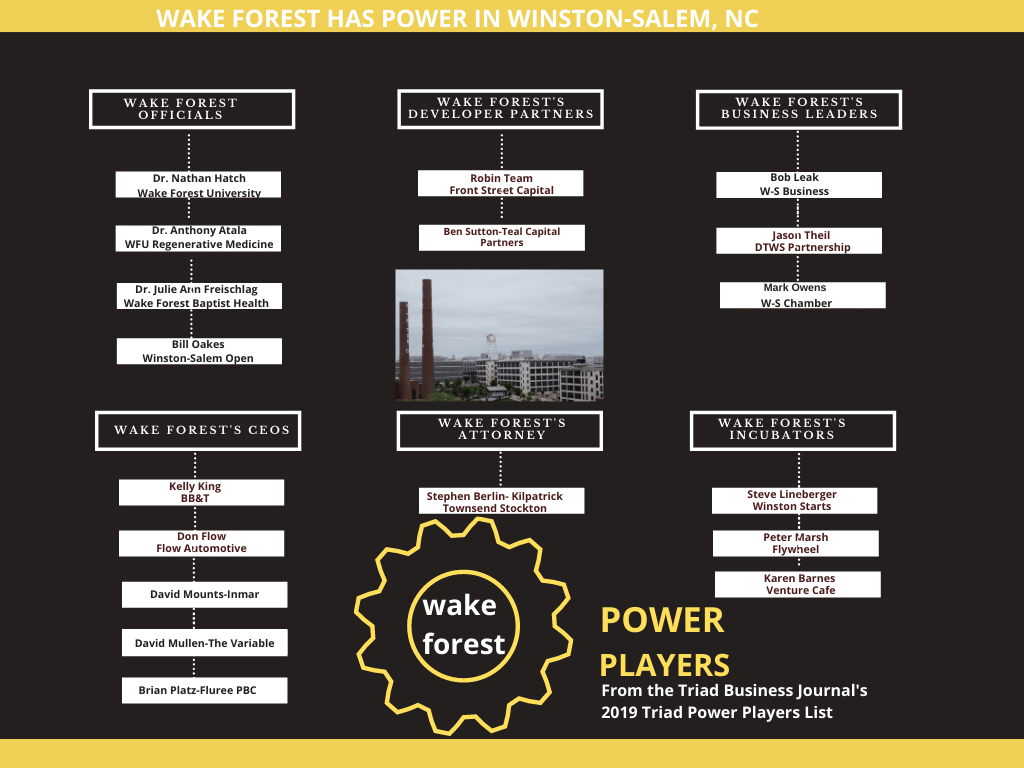 Decades ago, business titans in the Triad ran industrial empires that produced vast amounts of cigarettes, textiles, and furniture. No one needed a business publication to tell the public who the ‘power players’ were. Their names were on the factories that dotted the Triad’s landscape.

I can’t speak to who holds power in Greensboro and High Point today. But in Winston-Salem, power is largely held by Wake Forest University. The university that Reynolds moved to Winston-Salem in the 1950s now has a firm grip on our city.

But I’ll go one step further than the Triad Business Journal. In Winston-Salem, Wake Forest is the power behind the throne.

Wake Forest President Nathan Hatch isn’t much of a public figure. But make no mistake, he yields considerable power in our city. A past board member of the Winston-Salem Alliance, Dr. Hatch (with WFU alumni Don Flow), leads a “kingpin” group that pays Mayor Allen Joines’ $180,000 annual salary.

Mayor Allen Joines, in turn, mobilizes City Hall to do the Alliance’s business, and helping Wake Forest is a big part of the W-S Alliance’s business. From creating the Wake Forest Innovation Quarter (no small task) to redeveloping 500 West Fifth, the City of Winston-Salem is always glad to use public dollars to help a private university with a huge endowment.

If you don’t believe me, look at Akron Drive’s planned extension to Wake Forest Whitaker Park or the Salem Creek Connector and Research Parkway‘s construction (roads that benefited the WFU Quarter). In Winston-Salem, all roads lead to Wake Forest. Or if they don’t, they soon will. That’s tens of millions of dollars of tax dollars spent for the benefit of a non-profit that doesn’t meaningfully contribute to Winston-Salem’s tax base.

Half lemonade. Half tea. All thanks to you. Celebrating the 60,000 alumni, parents and friends who invested a billion dollars in our students, faculty and @WakeForest community! #WakeWill #GlassOfTheFinest #GoDeacs! pic.twitter.com/asAWVJGgfE

Last month Wake Forest announced that its Wake Will campaign raised over $1 billion. That’s a great deal of money. A hefty percentage of that $1,000,000,000 should go to the poor and needy in Winston-Salem, instead of luxury sports facilities. Wake Forest is a bastion of privilege surrounded by an unequal and increasingly violent city. Funding a community land trust, building affordable housing, starting an anti-eviction clinic; these are tangible measures Wake should take to improve material conditions in its adopted hometown.

Wake Forest took the lead on the city’s Poverty Thought Force. But it’s time for them to use their power and resources to help the powerless in Winston-Salem. Writing a report isn’t enough. Someone needs to throw some cold water on Dr. Hatch and let him know that Wake’s free ride with the City of Winston-Salem is over; we’re onto him. We want the needs of the people of Winston-Salem to be put first, instead of the prerogatives of a private university.